A Little Let Down: Warcross by Marie Lu Review

For the millions who log in every day, Warcross isn’t just a game—it’s a way of life. The obsession started ten years ago and its fan base now spans the globe, some eager to escape from reality and others hoping to make a profit. Struggling to make ends meet, teenage hacker Emika Chen works as a bounty hunter, tracking down players who bet on the game illegally. But the bounty hunting world is a competitive one, and survival has not been easy. Needing to make some quick cash, Emika takes a risk and hacks into the opening game of the international Warcross Championships—only to accidentally glitch herself into the action and become an overnight sensation.

Convinced she’s going to be arrested, Emika is shocked when instead she gets a call from the game’s creator, the elusive young billionaire Hideo Tanaka, with an irresistible offer. He needs a spy on the inside of this year’s tournament in order to uncover a security problem . . . and he wants Emika for the job. With no time to lose, Emika’s whisked off to Tokyo and thrust into a world of fame and fortune that she’s only dreamed of. But soon her investigation uncovers a sinister plot, with major consequences for the entire Warcross empire.

I honestly had so many high expectations for Warcross.

First, because a lot of people seem to love Marie Lu and her Legend Series. Second, because the cover is absolutely gorgeous and third, because so much hype surrounded this new novel. This isn’t exactly a negative review, but at 3.5 stars, let me tell you, I’ve read better books.

Let’s start off with the thing I loved most about this book: world-building. It’s insanely detailed. I love how Marie Lu imagined this ultra-crazy, vibrant and super high-tech future set in LA and Tokyo. I naturally don’t gravitate to futuristic books like these (I think The Hunger Games destroyed me for everything else), but after reading the first couple of chapters, I kinda fell in love with the world she built so I was like, okay, I’m in.

And it was great. 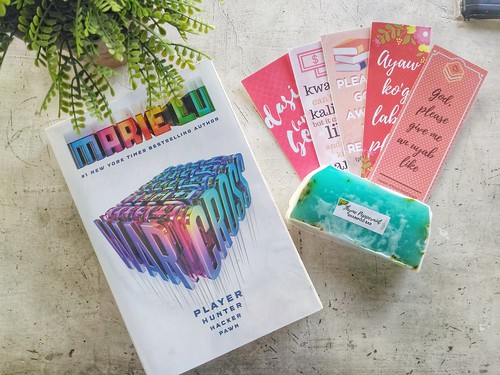 I was totally swept away by this crazy future. Emika Chen was easily lovable, too. The rainbow hair and tattoos fit right into this colorful future. I love the concept of Warcross, too. However, as I moved further into the story, I found that I just wasn’t feeling the thrill and excitement that should accompany this “thriller”.

For one, the mystery was honestly quite bland. Was there a  mystery to be solved at all? I thought it was all spoonfed and pretty obvious from the get-go. I didn’t find myself wanting to flip feverishly through the pages, which is disappointing. I was hoping for an undercurrent of suspense, but found none. There was just the noise of the Warcross crowd, but none of the dark or sinister plot the blurb promised.

Then there is Hideo Tanaka and his romance with Emika. At first, I kind of liked Hideo. So blatantly tsundere, that dude. I had high hopes for him…kind of like the one I had with The Darkling from the Grisha Trilogy, but unfortunately, he also fell short of my expectations. Even until the end, when the big twist came. He was cute, yes, but I didn’t feel anything for him other than the occasional “Awwe he so cute.”

All in all, I found myself less and less interested as the story went on. It wasn’t too bad a read, but it wasn’t too memorable, either.

Have you read this book? Let me know what you think!

Author D.A. Chan on What It Takes To Write Your Own Novel