Alice In Wonderland Got A Creepy Makeover: The Hazel Wood Review

The Hazel Wood by Melissa Albert

Seventeen-year-old Alice and her mother have spent most of Alice’s life on the road, always a step ahead of the uncanny bad luck biting at their heels. But when Alice’s grandmother, the reclusive author of a cult-classic book of pitch-dark fairy tales, dies alone on her estate, the Hazel Wood, Alice learns how bad her luck can really get: her mother is stolen away―by a figure who claims to come from the Hinterland, the cruel supernatural world where her grandmother’s stories are set. Alice’s only lead is the message her mother left behind: “Stay away from the Hazel Wood.”

Alice has long steered clear of her grandmother’s cultish fans. But now she has no choice but to ally with classmate Ellery Finch, a Hinterland superfan who may have his own reasons for wanting to help her. To retrieve her mother, Alice must venture first to the Hazel Wood, then into the world where her grandmother’s tales began―and where she might find out how her own story went so wrong.

Look out, I’ve got another review! 🙂

Hey, everyone! I’ve got a new resolution: try to post a new review every single day. Let’s see how I hold up. Ha!

Now that’s out of the way, let’s get back to business.

I picked up The Hazel Wood because of three things: the cover is gorgeous (I mean, look at it!), I’ve heard so much great things about it, and the bookstore was on a store-wide sale. What’s a girl to do?

The blurb sounded like a lovechild-retelling of Alice In Wonderland and Little Red Riding Hood. Naturally, I dove right in.

First, I didn’t expect the story to be set in the current time, which kind of threw me off briefly. I thought it was going to be told in a backdrop of some old or fantastical land and setting for some reason. But alas, we are in New York: the melting pot of all supernatural things in the YA fantasy world.

I was waiting for Alice to bump into Percy Jackson and friends, Clary and her Shadowhunters, or maybe even the Avengers. Why’s it always set in New York, I wonder? 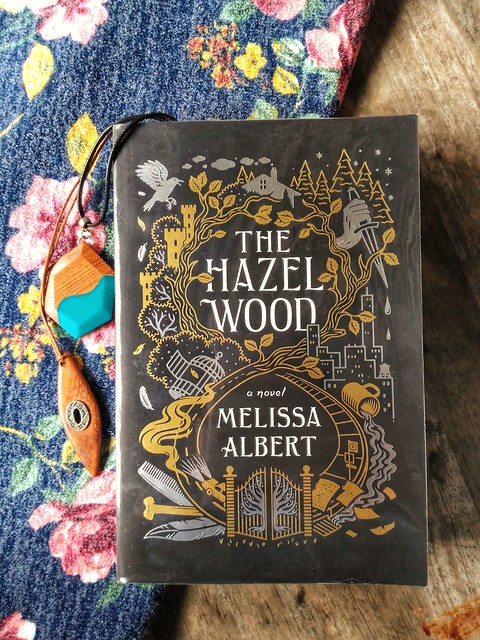 Anyway, it all ended up alright, because for a debut author, let me tell ya, this book was a great read.

First, the premise and the story itself were greatly executed. It was creepier than I expected; harsher, more visceral. It’s Alice in Wonderland with the creepy volume turned all the way up and there were times when the little hairs on my arms legit stood up. It’s definitely not a book to read right when you’re about to sleep. I had to watch several One Direction videos to wash everything off.

It’s a mishmash of all things strange and sinister. I loved the air of mystery that surrounded everything like a blanket. I loved the characters that literally came straight out of a fairytale. I enjoyed the narration and tone, too— it manages to be snarky and fearful at the same time.

What’s funny is that Alice’s nor Finch’s characters didn’t interest me as much as the fairytale characters around them did. Don’t get me wrong, I think they were still well-written and fleshed out— Alice more than Finch, actually— but next to characters like Twice-Killed Katherine, they kind of paled in comparison.

There were times where the crazy world gave me a kaleidoscope headache, but it was still a ride I thoroughly enjoyed. 4 creepy stars for this one!

Is It Worth The Hype? The Cruel Prince Review